The combination of classical music, the idea of fostering community spirit among the Baltic countries, and the focus on the sensitive Baltic Sea environment has evoked a widespread regional response, with many governments actively supporting the festival. But how did it all start?

Back in 1999…
A bright summer night in St. Petersburg. A boat trip on the placid waters of the Neva. Great food and drink. Emotions flow freely, new friendships are forged and big ideas expressed.
Michael Tydén, Managing Director of Berwaldhallen, and conductors Esa-Pekka Salonen and Valery Gergiev, are outdoing each other using the kind of platitudes that represent the truth when spoken at the right time. Although they don’t discuss the festival as such, they all feel certain that this time – ten years after the fall of the Berlin Wall – is the right time to set up a big, collaborative music project based around the Baltic Sea. Two months later, the idea is discussed again over lunch at the Lyon restaurant in Helsinki. Esa-Pekka Salonen and Michael Tydén immediately start imagining concerts, Baltic Sea boat trips, and ways to inspire environmental commitment to the long-suffering inland sea. What they don’t realize at this point is that they’re already outlining what is soon to become Stockholm’s first big-time classical music festival.

Planning it all
In February 2000, Valery Gergiev is thrilled to find out that plans are being made. When Michael Tydén and Esa-Pekka Salonen visit him during a rehearsal at Baden Baden the following year, it becomes clear that this is the team that will make the festival dream come true. After enjoying a tasty dinner they walk back to the hotel, arm in arm. Had it not been for the chauffeured Mercedes right behind them, they might have been taken for three merry students coming home from their graduation party. And that’s how it feels, too – that this is the beginning of something big. The festival is definitely going to happen, and anything seems possible.

Time to get real
In June 2002, the team gives a press conference at Stockholm’s Grand Hotel to announce the first festival, which is going to take place in 2003. WWF, the former World Wildlife Fund, becomes actively involved in order to add authority to the festival’s environmental agenda. Meanwhile, Esa-Pekka Salonen tries explaining to his children why the water at their holiday-home near Helsinki is deteriorating. It’s obvious to him, as well as to bird-watcher Michael Tydén, that one of the festival’s purposes will be to draw attention to the pollution of the Baltic Sea.

The first Festival
The first Baltic Sea Festival was a success before the music even began. Five full-size orchestras, as well as world-class choirs and soloists, had been brought in. It’s fair to say that in terms of logistics, one Baltic Sea Festival could easily outshine ten rock festivals. The event also reinforced the idea of the Baltic Sea as a connecting inland sea and as a means of communication, instead of an alienating political border. When festival goers looked at the map, they were often amazed to discover how close these countries really are, geographically. This, alone, is a major success. When people open their eyes and see how similar they are to each other, and realize that we have a shared responsibility for the arts and for the natural environment – that’s when change is possible. And music is an outstanding agent of change.

Living the dream
Since it first took off in 2003, the festival has grown and evolved. The dream of taking music out to sea, and to involve more areas around the Baltic Sea, has been realised through the partnership with Tallink Silja. The festival has become an arena for great musical experiences, and a place where musical meetings will keep strengthening our common interests in the Baltic Sea, and in our own future, for many years to come.

”Our primary interest is to present the very best musical and artistic products from the Baltic Sea region. The second aspect is to bring emerging phenomena and ensembles to the forefront. The third aspect is political and environmental. I’m not so naïve that I believe that classical musicians will be able to save the Baltic Sea from environmental abuse. But I do believe that our chances to improve the situation will be much greater if we contribute to raising the general consciousness, by permeating the festival with an ecological theme.” Esa-Pekka Salonen, Baltic Sea Festival Artistic Director. 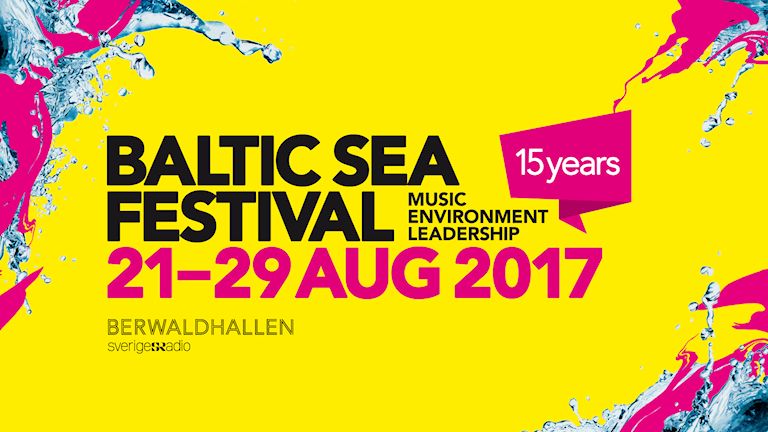